Viva Rovers takes its name from a piece of grafitti daubed on the underside of the Balby Road rail bridge which I have passed on my way to and from Doncaster fixtures for the best part of a decade. The site began life in July 2006 as part of the Rivals network, though the aim from the outset was to offer a more reasoned and considered take on Doncaster Rovers than the other websites available at the time. Although this approach did not make the site a universal favourite amongst Rovers fans it did build something of a cult following and lead one supporter, posting on the VSC forum to describe Viva Rovers as ‘high-brow’. Praise indeed.

For three years Viva Rovers trundled along nicely, then in July 2009 Sky Sports, who had purchased Rivals a year earlier, decided to pull the plug on the network. With all the subtlety and honour you would expect of a Rupert Murdoch backed enterprise they did so unannounced, simply taking the site offline and then notifying editors of tje move via an email some hours later. Alas Viva Rovers like numerous other established sites that had been laboured over by supporters for years, disappeared into cyber-space. In the days after Sky terminated Rivals I had a number of offers to relocate Viva Rovers on alternate club website networks. Whilst I don’t doubt that these offers were from folk more genuine and honest than Sky I declined, thinking it would be much safer to go it alone, as such relocated the site here.

Viva Rovers has twice been mentioned in the hallowed pages of premier football magazine When Saturday Comes, first when our opinion was sought on the aforementioned Rivals closure, and secondly when we were acknowledged with a Bronze in the 2009 WSC Web Awards.

Viva Rovers came to an end on Christmas Eve 2011 as alas the enjoyment had gone. Thank you to all those who took the time to read the site during its five and a half year run, and to the many folk who offered kind words on Viva during its existence, many of which are reproduced below.

If you wish to get in touch with Viva Rovers then feel free to drop us an email via vivarovers@hotmail.com 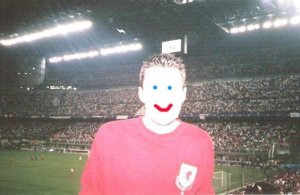 Though, like now, we often refer to ourselves in the plural here at Viva Rovers, the site is actually written and edited by just one man. Glen Wilson began the website in 2006 to fill time as he looked for something his gran would regard as a ‘proper job’. Such employment is yet to arrive, but Viva Rovers continues unabashed and unfunded. In addition to this fine site Glen also writes an equally unheralded travel website called Platform Four and wrote and edited the 2010 World Cup website Twinty Tin, which was enjoyed by the BBC World Service, if no-one else. If that wasn’t enough to inflict on folk Glen also edits the Doncaster Rovers fanzine Popular Stand, having written for the ‘zine since 2000, and is an occasional contributor to When Saturday Comes magazine.

4 thoughts on “About this Site”

If you've enjoyed Viva Rovers then the chances are you will also enjoy one of the many fine websites linked below...